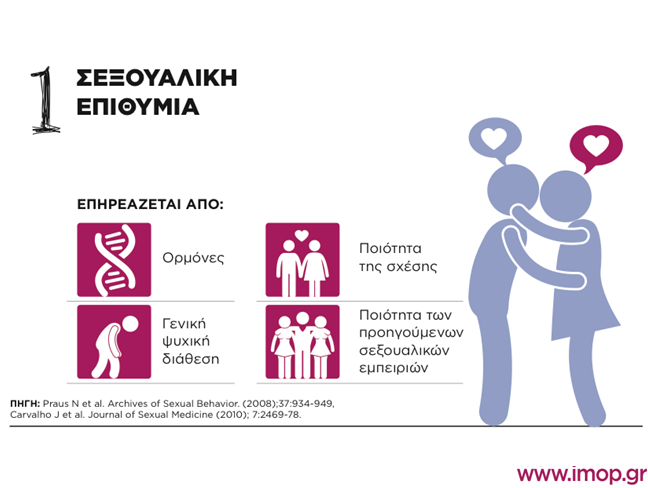 In order for the sexual function to begin in men, sexual desire is necessary. Usually, sexual desire in men becomes apparent as an impulse and is accompanied by sexual thoughts and fantasies. However, recent studies have shown that the sexual function can be triggered, without the necessary pre-existence of sexual impulses, as long as there is intent on the part of a male to allow himself to be taken by the sexual stimuli, in order to enjoy himself. The idea that men are always in the mood to have sex is clearly a myth. Low levels of testosterone, stress or symptoms of depression, unpleasant previous sexual experiences or even feelings of fatigue, are often factors that inhibit sexual desire. 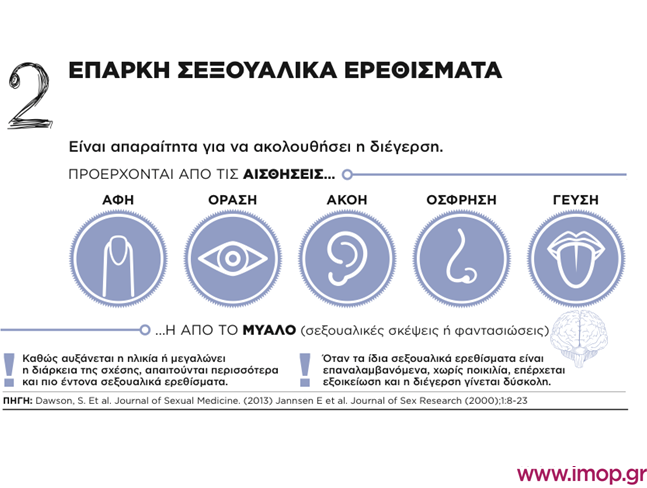 However, desire alone is not enough to spark sexual function, because sexual stimuli are equally important. Stimuli that the brain can evaluate as sexual come from all our senses, vision, hearing, smell, touch and taste, as well as from our thoughts. The mind decides whether stimuli are sexual using its memory and associations and taking into account the circumstances. It would seem that the image alone of a naked female body is not enough to trigger sexual function, but that the brain has to relate it to sexual pleasure and pleasant experiences and to be in a proper context (i.e. place, time) that allows for sexual expression. A typical example of an unfavourable setting is compulsory sex aiming at conception. Those are the conditions under which sexual games are replaced by a thermometer and ovulation tests, while the erotic initiative and pleasure becomes forced by an appointment date in the calendar that has to be kept. 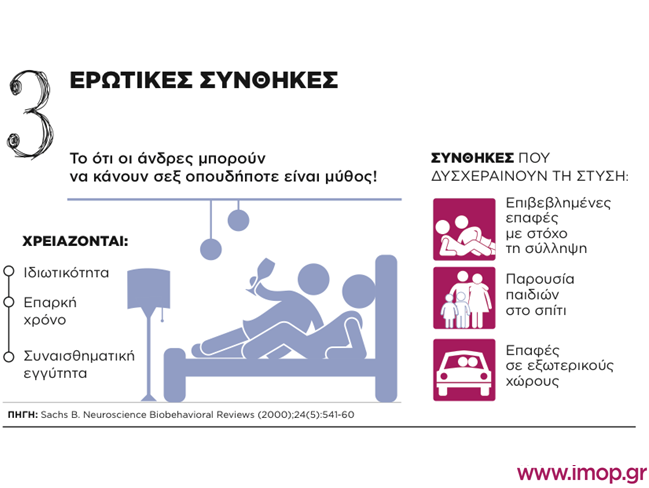 The right circumstances are of particular importance. The commonest “negative” conditions that hinder achieving an erection are: a) the presence of third parties in a nearby room, i.e. children, which creates fear in the parents that they will be “found out” by their children b) obligatory sex on a specific day, perhaps even at a specific time. The most common example is a couple’s attempt to conceive. Men may not always be in the mood, especially when their partner, without being in an erotic mood herself, demands sexual contact on the fertile days of her cycle; c) sexual contact with time and space limitations, that do not secure privacy, i.e. in (potentially) public areas. In these cases the necessary emotional intimacy is not secured, while there are many stimuli that can distract attention, due to the fear of being noticed. All of this could lead to an inability to attain or even retain an erection, and it is called circumstantial failure. These experiences cause performance anxiety in men.

Absence of stress during intercourse 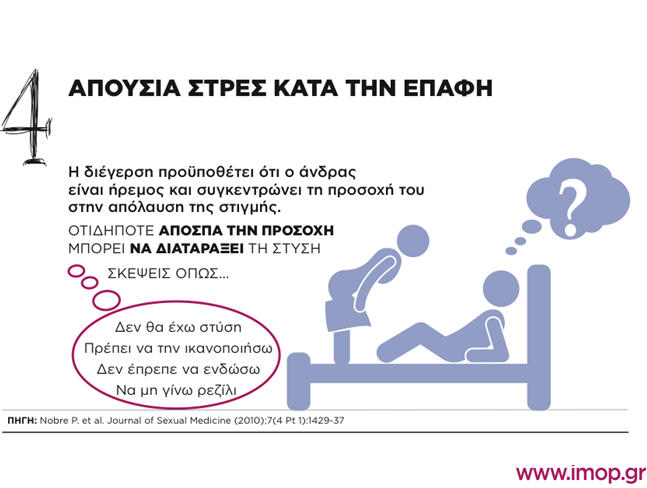 The commonest psychogenic cause of erectile dysfunction is performance anxiety. With this term we refer to the stress caused during sexual contact. In this case, men feel anxious about achieving a satisfactory erection, satisfying their partner, or making a good impression on them (i.e. penis size, erection quality, evaluation as a lover), although such thoughts are not common for women. These thoughts are unpleasant and also distract attention from sexual stimulation resulting in hindering the sexual arousal necessary to have or sustain an erection. Such experiences cause performance anxiety in men and may easily lead them into a vicious circle of failure and psychogenic erectile dysfunction.

Anatomy of the Penis Πέους 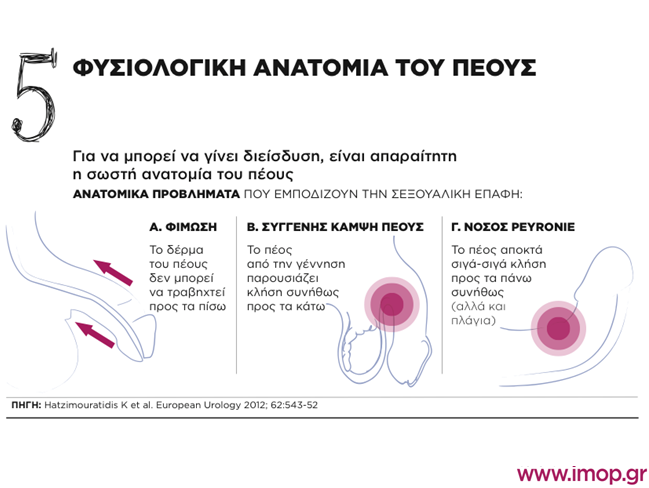 There are urological conditions that hinder sexual contact for anatomical reasons. Phimosis is a common cause, where in the attempt to pull back the foreskin of the penis and reveal the glans (penile head), pain is caused; in some cases this is impossible due to scar tissue on the foreskin (prepuce). The problem can be resolved either by releasing the adhesions in children, or with circumcision, a surgical procedure performed under local anaesthesia during which the foreskin is excised. Penile curvature, whether congenital (meaning that a man was born that way), or not, i.e. that might be due to Peyronie's disease (this usually follows an injury during intercourse rarely noticed when it occurs; instead it is noticed months later when the curving starts with pain during erection). The penis may curve more than 90 degrees. Curvatures of more than 30 degrees usually hinder intercourse and surgical treatment is required; this requires special techniques depending on the case. 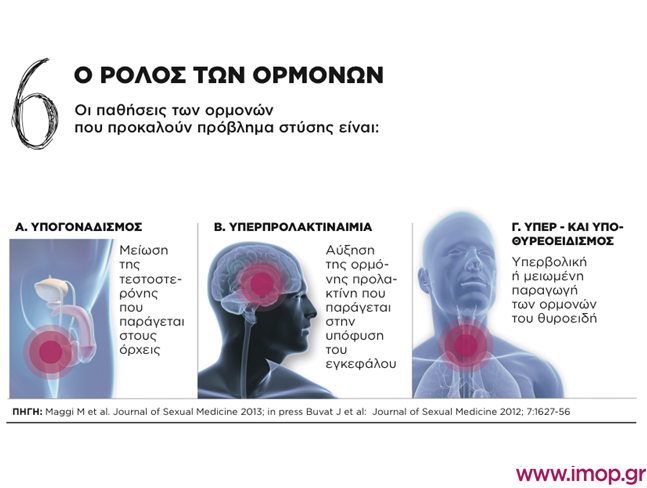 Testosterone is the main male hormone responsible for sexual desire and men's secondary characteristics (hair growth, growth of sexual organs, tone of voice, body fat distribution, etc.). It also plays a role in erection, yet, only when its levels are pathological. Lack in testosterone rarely occurs during childhood (primary hypogonadism), while it often occurs in men in their 50s (late onset hypogonadism). In both cases it is treated with the administration of testosterone, which must always be prescribed by a specialist physician (i.e. if taken by men with normal levels of testosterone it could lead to gradual atrophy of the testicles and subfertility). Increased prolactin is directly correlated to decreased sex drive and secondarily to erectile dysfunction. It is either due to excessive secretion or to the presence of a benign tumour (prolactinoma) in the pituitary gland. In the first case it is treated with medication, while in the second it may be surgically managed. Lastly, conditions of the thyroid gland are related to both erectile dysfunction and premature ejaculation (particularly hyperthyroidism)

Nerves involved in the erectile mechanism 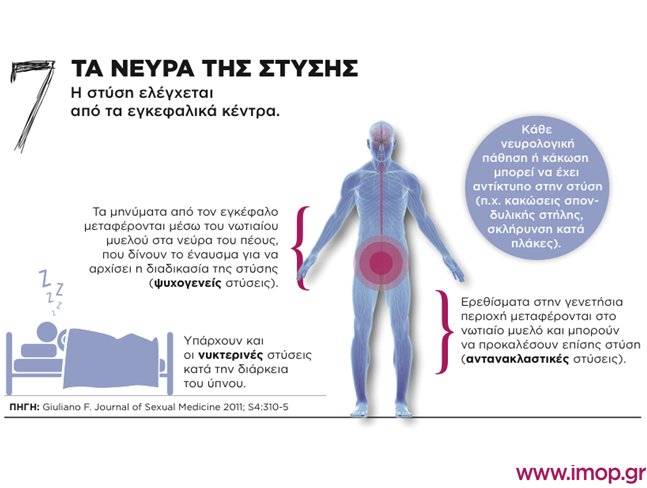 Obviously, in order to achieve an erection one needs an anatomically intact and functionally sound nervous system. The brain managing sexual stimulation and sending initial messages, as well as the spinal cord (with two centres at the 4th-6th lumbar vertebra level and the 2nd-4th sacral vertebra level) determine erectile function in men. Therefore, any damage to the brain or the spinal cord may have an impact on erectile function (as well as urination/defecation). Furthermore, peripheral nerves play a crucial role, since they transfer the message for the erection from the spinal centres to the penis. Thus, peripheral neuropathy has a negative effect on erection, as do surgical procedures (i.e. radical prostatectomy to treat prostate cancer) which injure the cavernous nerves, i.e. the nerves that end in the cavernous bodies and initiate their relaxation so that they may be filled with blood and cause an erection. 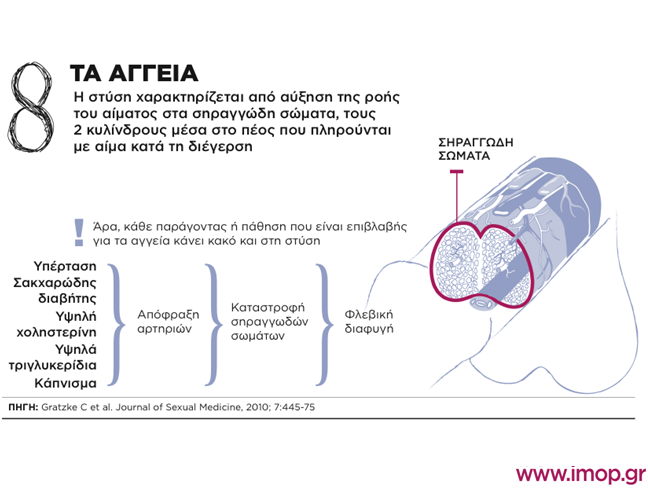 Erection is a vascular phenomenon. The two cavernous bodies, i.e. the two cylinders that fill with blood in order for an erection to be achieved, contain an artery each at their centre, which branches off into many smaller arteries, the helical arteries. When a nerve stimulus arrives at the penis, the arteries dilate and blood flow increases through the helical arteries to the cavernous bodies. Thus, pressure is increased in the cavernous bodies, which in turn exercise pressure on the network of veins surrounding them. This pressure leads to the closure of the venous network, and the pressure increases even further, causing a hard erection. Common causes that block arteries – anything bad for the heart is bad for erectile function - are those that cause narrowing/obstruction to the small helical arteries, first, and then to the larger cavernous arteries. Consequently, the cavernous bodies are slowly destroyed by ischemia and can no longer exercise pressure onto the vein network. This results in the limited blood that reaches the cavernous bodies escaping via the venous network (dysfunction of venous occlusion).

Erection is the health barometer of the heart 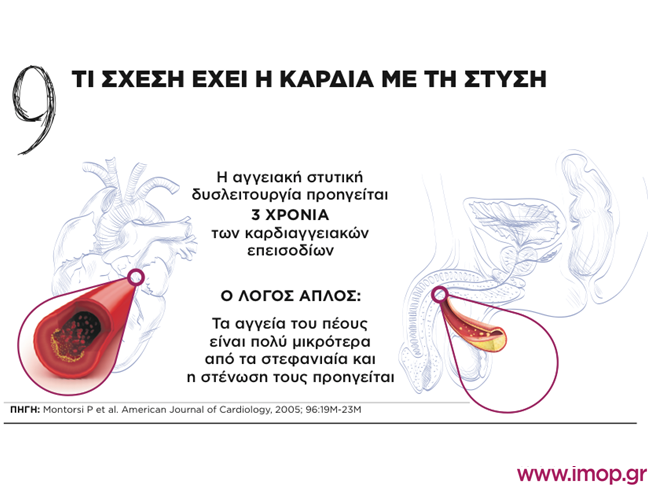 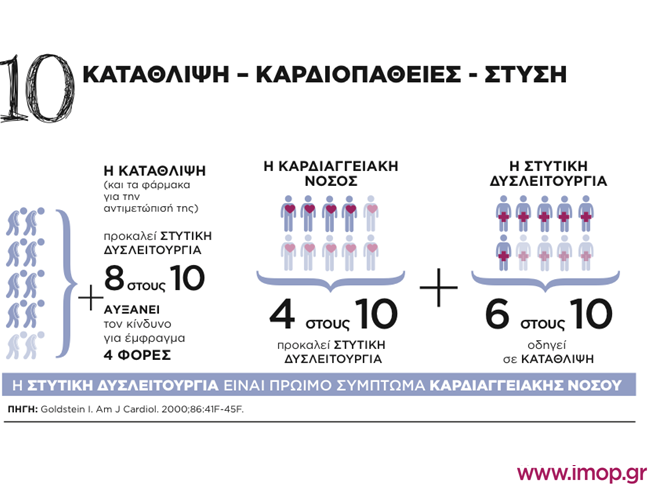 It is well known that these three conditions are related. A man with erectile issues has an increased risk of developing moodiness or depression. Depression increases the risk of a cardiovascular episode. On the other hand, depression – and anti-depressants– is a well known cause of erectile dysfunction. Lastly, cardiovascular diseases have serious consequences on erectile function, while they often lead to depression that is exacerbated by one’s inability of achieving an erection. A vicious circle with a mortality rate! 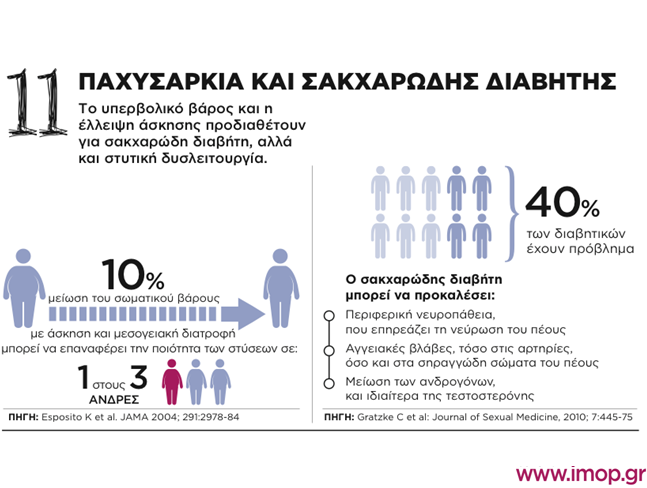 The relation of obesity to the metabolic syndrome, initially, and diabetes mellitus, thereafter, is well known. The metabolic syndrome is a collection of metabolic disorders that inevitably lead to atheromatosis and cardiovascular disease. These disorders include, obesity, dislipidaemia, hypertension and diabetes mellitus, and their common denominator is the presence of resistance of the peripheral tissues (and mainly muscle tissue) to the effect of insulin. Both the metabolic syndrome and diabetes - the latter to a much higher extent - cause erection problems. More than 40% of diabetics will present some erection issue, while 10 years of high blood sugar level suffice to cause a serious erection problem. Naturally, this occurs when men neglect their problem but, in this case, prevention saves erectile function. 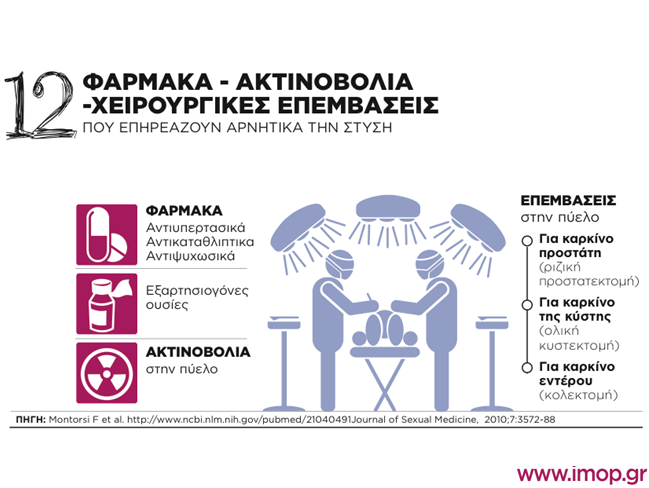 Many categories of medication have the adverse side-effect of erectile dysfunction. The main categories are diuretics, many hypertensives (such as β-antagonists), antidepressants (serotonin reuptake inhibitors) and anti-psychotics. Chronic use of addictive substances also has a negative impact. Lastly, adverse side-effects of surgical procedures in the pelvis, through which penile nerves and vessels pass, include erectile dysfunction. The most common one of these procedures, i.e. radical prostatectomy for prostate cancer, is accompanied by high rates of erectile problems, regardless of the surgical method used (open, laparoscopic, robotic). 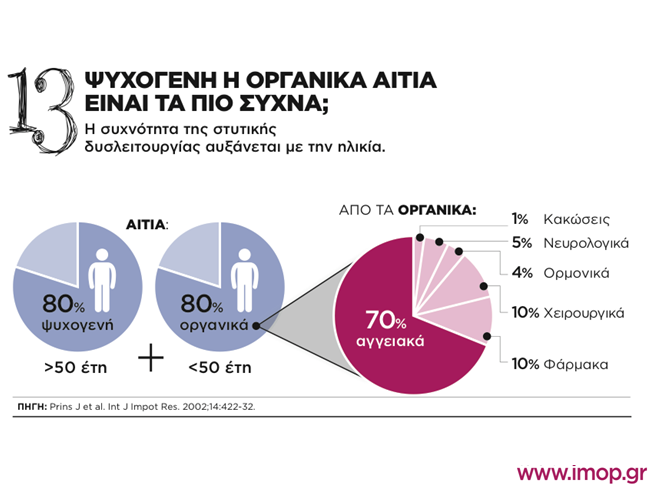 The physical causes of erectile dysfunction result from systemic conditions that mainly affect the vessels, such as high cholesterol and lipid levels, hypertension, diabetes mellitus, cardiovascular diseases. Therefore, it stands to reason that they are rare in men under the age of 50. On the contrary, psychogenic causes, such as performance anxiety which is associated with the initial phases of a relationship, condom use, guilt/inhibitions, body fatigue, etc. are classic causes among young people. Furthermore, significant social issues, such as unemployment that mainly strikes young people, has been found to increase the chance of erectile issues by 4 times. 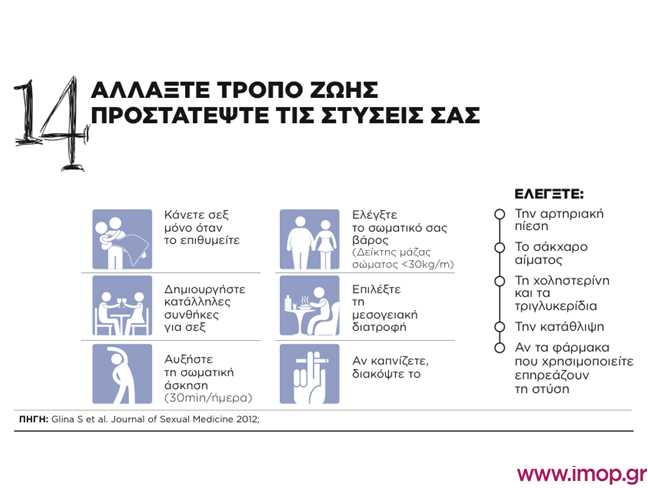 Studies on overweight men and average erectile dysfunction have shown that a 10% loss in body weight through the Mediterranean diet and exercise can resolve the issue; specifically, erection quality can be restored to normal levels. Furthermore, smoking damages penile vessels and is responsible for erectile dysfunction. After quitting smoking vessels are gradually restored to normal. Therefore, not only is destruction stopped, but the organism is given a chance to heal its “wounded” vessels. The slogan for good quality erections (which are hard and maintained) could be summarised in the following sentence: what is good for the heart is good for erectile function!

And if there ever is a problem, the sooner it is treated, the more easily it may be resolved! Thirty years of research in erectile dysfunction have clearly proved that the problem needs to be managed early. This is because early treatment is easier, and also prevents further damage; finally, a diagnosis may uncover hidden, more serious pathology symptoms, i.e. cardiovascular disease or diabetes mellitus. Take the first step and consult your doctor today!