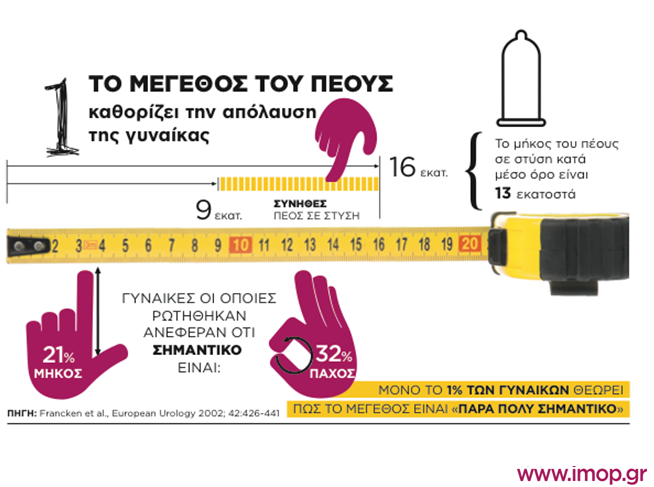 Body image issues in men concern mainly penis size. Body image refers to the thoughts one has about their body, as well as one's notion as to how others perceive it.

Many men, affected by common myths or pornographic films, have a non-realistic perception of what the “normal” penis size is. Besides, the myth that size plays a catalytic role in pleasuring a woman reinforces the importance attributed to penis size.

Body image affects sexual function mainly through the thoughts that dominate during contact (Pujols 2010). That is, when concerns regarding the body are so intense that they distract attention from sexual stimuli, then it is very possible that satisfaction will decrease and dysfunction may appear.

In a recent study, 21% of women asked replied that penis length is “important” and only 1% that it is “very important”. Length was less important than girth and 32% replied that girth is important.

Penis length is determined by numerous factors, mainly racial. Penis length when erect ranges from 11 to 15 cm. (average length for Caucasian men is 13 cm).  Science has determined that penis size is pathological when it is under 7cm (vagina length is approximately 7cm.).

Nonetheless, studies agree that how we feel about our body affects our sexual satisfaction much more than objective physical characteristics (Weaver 2006). 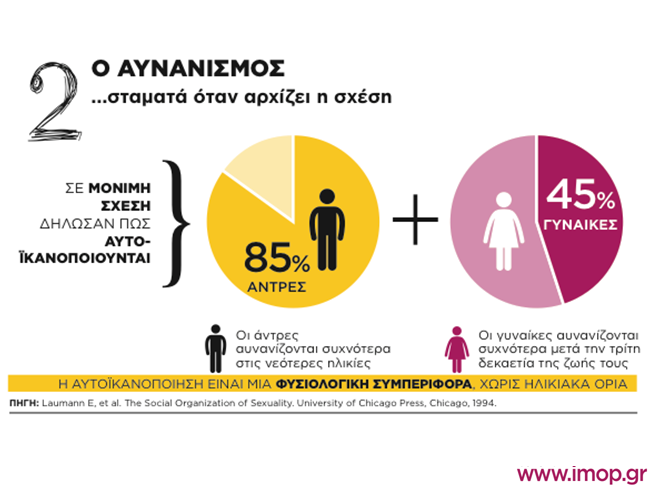 Homosexuality is a pathological condition 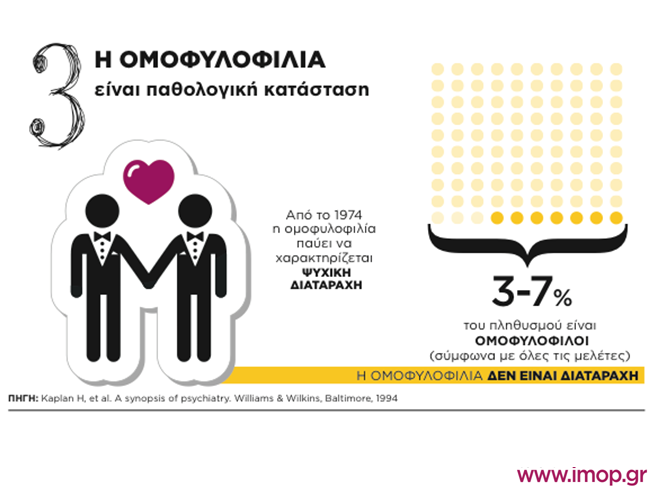 After 1974, the American Psychiatric Association stopped characterizing homosexuality as a psychological disorder.

Human sexual orientation is usually not experienced as a choice, but as a psychological urge to develop an emotional and physical relationship with individuals of the same or the opposite sex. However, the expression of this need presupposes that one enjoys a sense of freedom and security. In societies characterized by prejudice and low tolerance levels to anything different, one’s sense of freedom and security is low. Such an environment, however, impedes the expression of one’s personal needs. The right to enjoy one's sexual relations has been recognized as a human right by the World Health Organization, and all societies should safeguard an environment that respects and protects the sexuality of every individual. Only within such an environment can we explore, understand and experience the faces of our sexuality, without guilt or negative emotions.

Picking a partner is based on sexual performance 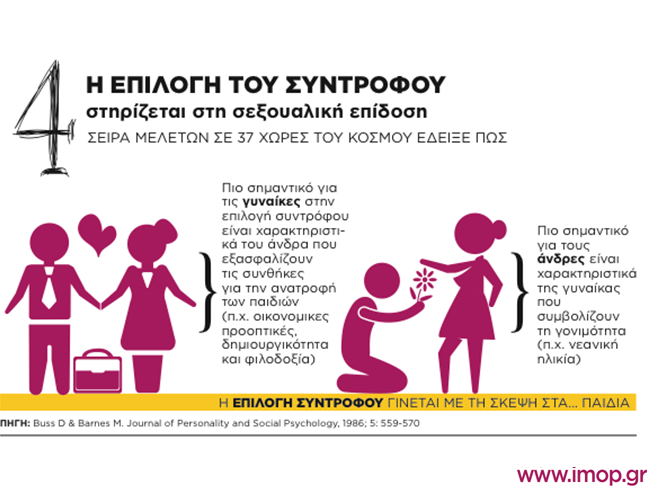 Many men believe that sexual performance is a defining factor in their being preferred by a woman. However, evolutionary psychology has shown that women are interested in men in whom they discern characteristics that they consider important in raising their children.

A series of studies by David Buss in 37 countries around the world have shown that attractive physical appearance is important for both genders, but that men find it more important than women. As far as the financial power of the partner, the same series of studies showed that it is more important to women than to men. This is connected to women's desire to secure the survival of their children.

Men are always ready for sex 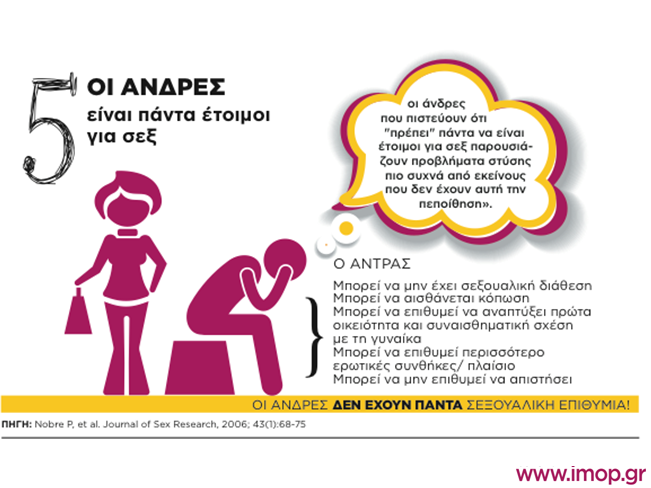 Many men believe that in the presence of an attractive woman they must always be able to have an erection. This is not true, i.e. a man may feel tired, may feel the need to develop some intimacy and an emotional relationship with the woman first, may not wish to be unfaithful, may feel guilty or he may not like the circumstances, etc.

Furthermore, it often occurs that erections are caused and then lost during penetration or contact, prior to climaxing. Many things could be happening: his desire was not strong enough, he was too stressed about impressing the woman to perform or there might well have been incidental reasons. In fact, a recent study showed that those who believed that they “must” always be ready for sex, were more likely to present erectile problems, when compared to men who did not share this belief. (Notre, 2006)

The duration of sexual act is 30 minutes 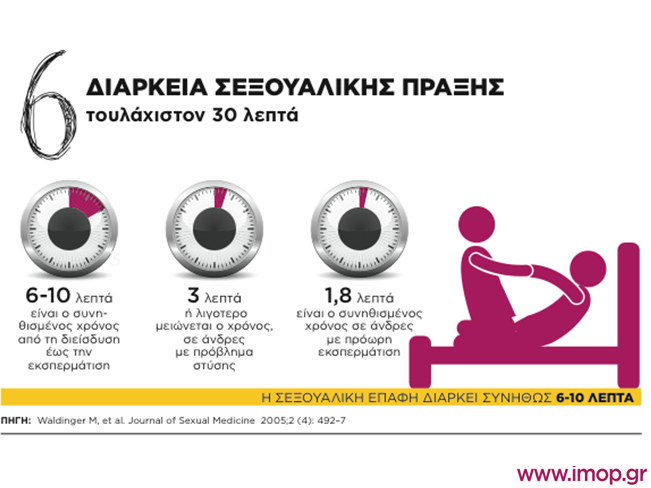 Numerous studies have recorded the time required for ejaculation in men with or without problems. Three of these were published in the “Journal of Sexual Medicine”: the first one (2005) was carried out in 4 European countries and showed that the average time until ejaculation in men was 5.4 minutes.

The third study (2007), which only included men with premature ejaculation, recorded that 90% of them ejaculated in less than 1 minute.

Sex happens on a daily basis for most couples 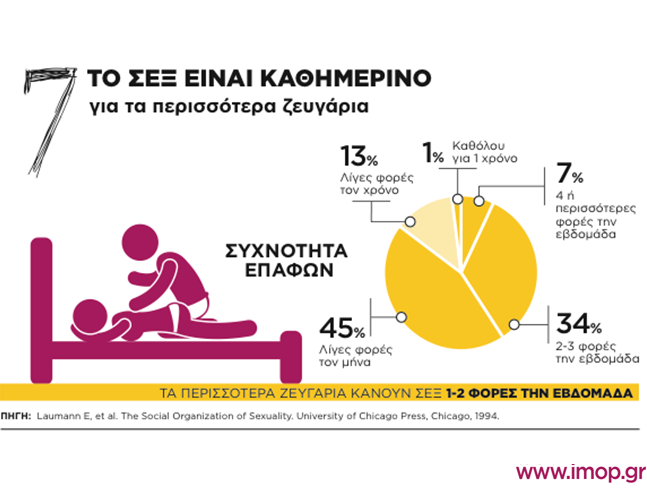 The myth that sex is a daily activity is not true for the majority of couples. It seems that most couples have sex 1-2 times a week (Laumann, 1994).

The fact that a high percentage of couples is not satisfied with the frequency of their sexual contacts indicates there is a gap between peoples' expectations and what they finally manage to experience in their relationship.

The fact that dissatisfaction was common in both genders shows that the problem does not occur from different levels of sexual desire, but from the fact that other pursuits and obligations take up the time the couple could spend together. 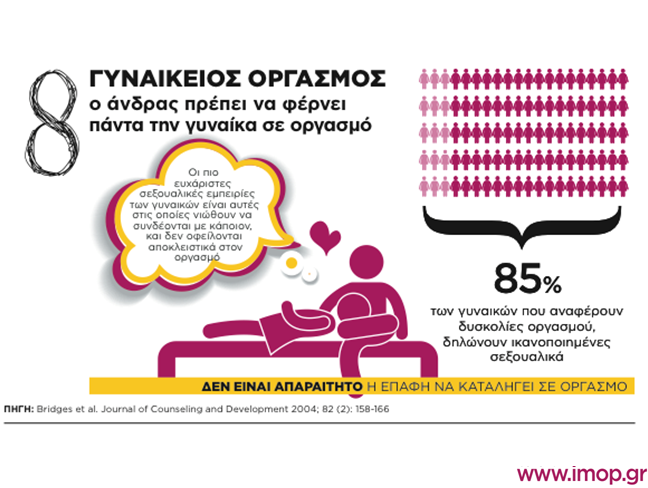 A man may contribute to the pleasure of a woman through his sexual practices and relationship with that woman, but he does not have absolute control of the situation. An important role in a woman’s pleasure is played by the woman herself, i.e. how relaxed and rested she feels, how well she knows what she likes and how comfortable she feels in showing her partner, if she has sexual thoughts, etc. Every person, regardless of their gender, affects their own personal pleasure, as well as that of their partner.

Being obsessed with achieving an orgasm and focusing on it may reduce pleasure for both partners and even destroy their sexual relationship. 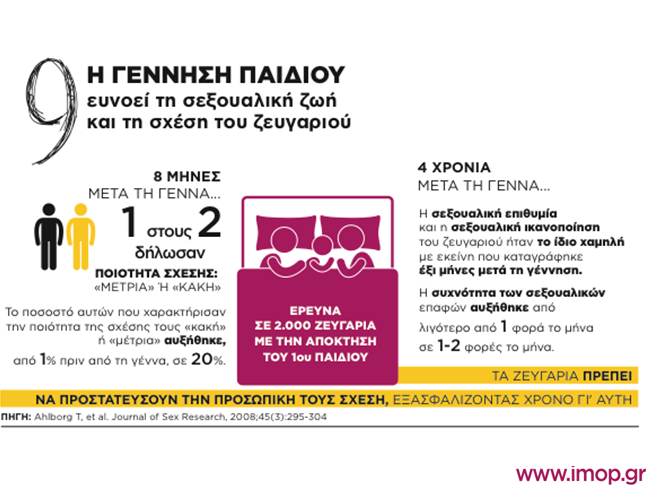 A study of couples after having their first child showed that, 8 months after the arrival of the child, 50% replied that their sexual life was “bad” or “not very good” and one in five wanted help with it. Furthermore, the percentage of those who characterised the quality of their relationship as “bad” or “not very good” increased, from 1% prior to the birth to 20% 8 months after it. Young couples have to protect their personal relationship, by making sure they find time for it.

Even the effort to conceive can cause sexual problems. Women may be interested in sex only on their fertile days, while the man is called upon to perform his duty on a specific time and day, which may result in psychogenic sexual dysfunction.

The use of pornographic material is catastrophic for a relationship 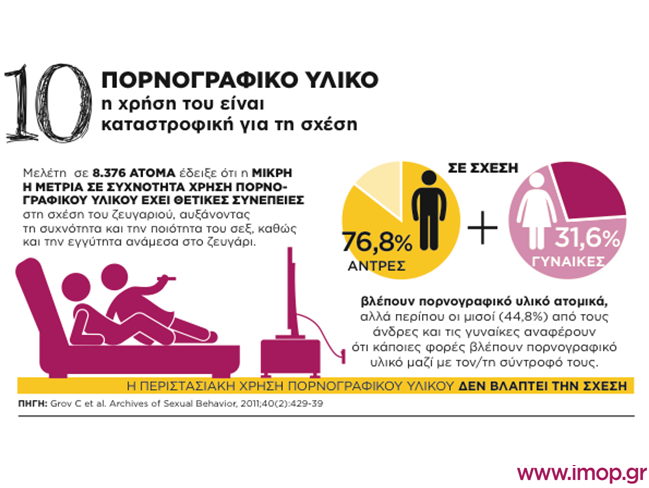 A recent study (Grov 2011) of 8,367 people, showed that small or medium frequency in the use of pornographic materials has positive consequences on a couple’s relationship, increasing the frequency and quality of sex, as well as the intimacy between the couple members.

Furthermore, low or medium use of pornographic material seemed to be associated to better sexual communication in couples.

A survey of 1,291 people in steady relationships presented interesting data, comparing the use of pornographic materials as a solitary activity or as an activity for the couple (Maddox, 2011)

It is impressive that global proceeds from the pornography industry are estimated at approximately $97 billion, an amount that is haigher than the total proceeds of Microsoft, Google, Amazon, eBay, Yahoo, Apple and Netflix together!

This is useful data not so much because it highlights the high frequency of pornographic material use, but rather because it stresses that behind such products there is an enormous industry, which, in order to sell, constructs attractive models of men and women, that are far removed from an average person!

There is no sexual activity after the age of 60 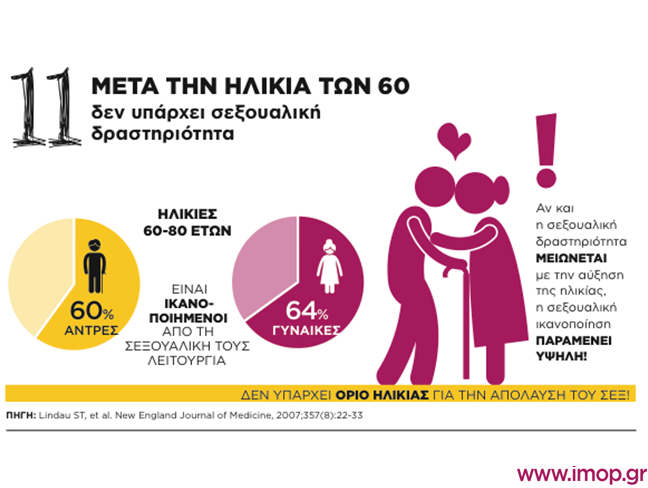 An issue that has started to concern the science of sexual medicine all the more recently is the sexuality of the elderly. This issue is of some concern, because in Europe, for example, the percentage of people over the age of 60 is expected to increase by 50% over the next 30 years (Kontoula, 2009). Furthermore, the expression of sexuality among the elderly has been related to better overall health, less frequent use of health services, as well as a better quality of life.

In this context, relevant data published recently about the population over the age of 65 in Spain (Palacios-Cena, 2012) confirmed that a significant number of elderly people have an active sexual life.

Specifically, 63% of men and 37.4% of women reported that they were sexually active. The most common sexual practices were kissing, embracing and intercourse.

The study agrees with other related studies and indicates that, if an elderly man or woman has a partner and good overall health, it is very possible that they may continue to enjoy sexual life far into their old age. 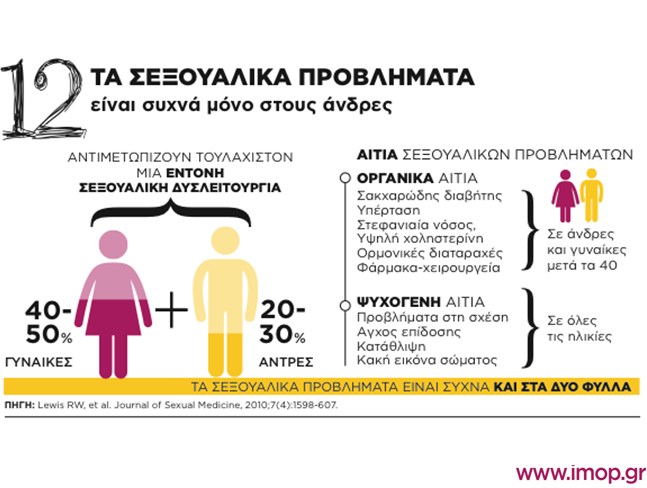 Modern epidemiology findings indicate that sexual problems are more frequent in men than in women. It is merely that in men a sexual problem (i.e. inability to maintain an erection or premature ejaculation) cannot be easily hidden.

Regardless of age, 40%-50% of women, as compared to 20%-30% of men, are afflicted by at least one intense sexual dysfunction. Sexual dysfunctions are related to age, since all organic causes in men and women are consequences of organic conditions associated with blood vessels, neurons and hormones. Psychogenic causes, however, are common in all ages.

‹ Female Sexual Desire up The secrets of a good erection ›