When is medication dangerous?

This is not a trap-question, but it has to do with a really existing problem. The answer is and should be one and only: "Medication is safe only when prescribed by a physician and distributed for the patient's benefit with the patient being fully informed about it and actively involved in the decision-making process related to his/her pharmacotherapy".

The European Alliance for Access to Safe Medicines (EAASM) is an independent Organization promoting a campaign for the safety of patients by excluding fake drugs and medications not complying with standard specifications. The primary objective of EAASM is to raise public awareness on issues related to counterfeit medications and that is the reason why they have organized an alliance of all European Patients' Societies. So far, EAASM have collected, investigated and brought to light a great many cases of fake drugs and illegitimate decisions taken by Public Health Authorities that were based on other criteria than the patient's benefit, which SHOULD BE the one and only acceptable criterion. EAASN believe that "this is the least the patient deserves to receive".

Attached below, follows a report by EAASM upon various issues. The report underlines that " therapeutic decisions are often made based on the cost and that both patients and health professionals tend to ignore this fact which is completely immoral and absolutely unacceptable". 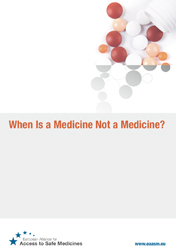 Lastly, in order to thoroughly investigate the extent of safety problems due to fake drugs (mainly ordered online/on the Internet), EAASM have created a database with examples from all over Europe. Also, anyone having any related information is encouraged to contact with EAASM, always with the reassurance that all information provided will be kept confidential.

‹ URO Prevent up Fake Drugs on the Internet ›